We are very fortunate to have the graphic artist Michael DuBois living nearby. Mike works in mixed-media, oil painting, and computer graphics, and is a pioneer in the creation of contemporary music art, with commissions from many famous artists running the gamut from The Rolling Stones and Tom Petty to The Grateful Dead and Santana.

Born in 1963, Mike grew up in Syracuse, NY, and began drawing as soon as he could hold a pencil. By age 12 he was designing t-shirts for local organizations; at 15 he was in several bands and designing posters for regional punk and new wave bands, and at 18 he was painting murals on the sides of city buildings for the Syracuse Art Squad. 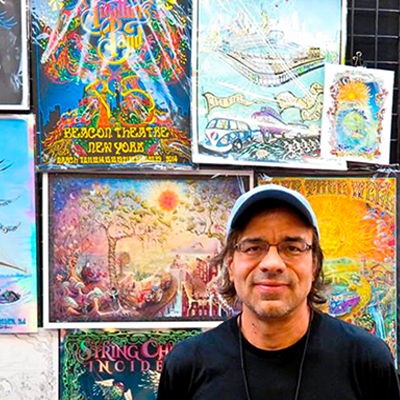 In 1986 I moved into a mountaintop house overlooking the Ashokan reservoir built by the artist Clarence Schmidt and previous home to Bob Dylan, The Band, and Van Morrison.  The 5 years I spent there gave me an insight into the muse and sublime magic that inspired Van Morrison to write 3 of the best albums of his career; His Band and the Street Choir, Astral Weeks, and Moondance.

Over the years I have frequented the Bearsville Complex countless times, attending shows at the theater, and eating at the restaurants there. Over the decades, I have seen it transform through several incarnations and multiple owners. I always considered it a cultural icon and centrepiece of Woodstock history.

Around 2018 the entire complex was in need of some serous TLC. I was excited and happy to hear that Lizzie Vann had purchased the property with the intention of restoring it in accordance with Albert Grossman’s original vision. I got a call from Lizzie with the idea of updating the original Milton Glaser logo with my own interpretation. As things progressed, I became part of the team of interior designers working on the inside and outside of the theater. I created a variety of portraits of musicians who lived and recorded in Woodstock and played at the theater. We used these along with some new wallpapers I designed to grace the walls of the bathrooms, hallways, and doors throughout the theater. My time living in Van Morrison’s house was helpful in the designing of  “ The Van Room “. During this process it was important for me to keep in mind Albert’s vision and the historical importance while updating the theater for the 21st century. Maintaining the integrity of the theatre’s design while paying homage to the rich musical history was my goal.

The second phase of the design process was branding and creating merchandise for the newly renovated venue. This is an ongoing and evolving process which will continue as we move forward.

After 30 years in music industry image creation, it has been gratifying and an honor to be able to offer my skills and services to a cultural gem here in my hometown of Bearsville’