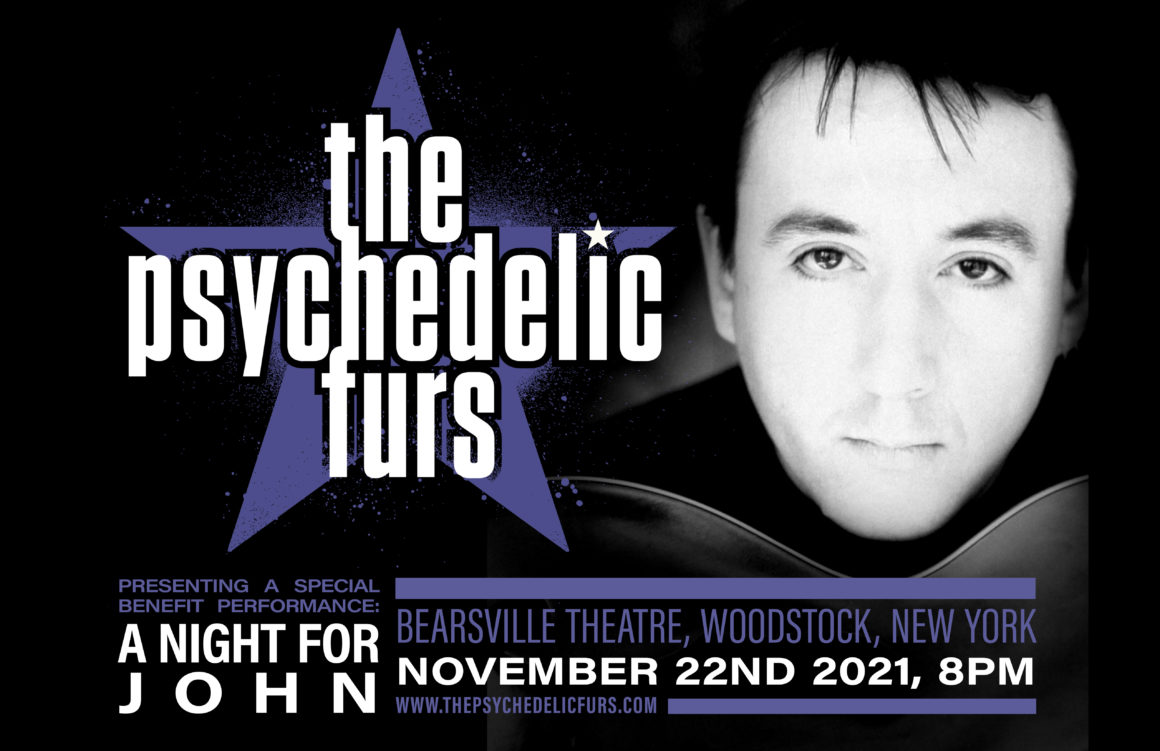 Psychedelic Furs Postpone Woodstock Show – A few tickets have been released! They will go quickly.

The Psychedelic Furs management, in a prepared statement, posted “regretfully Monday’s show, at the Bearsville Theater in Woodstock, NY, is being postponed due to unforeseen circumstances. All tickets for Monday’s show of November 22, 2021 will be honored for the rescheduled date of March 15, 2022.  Our apologies for the inconvenience. Please stay safe.”

The Woodstock show is among a number of shows the band is rescheduling and is now slating for 2022.

All tickets for Monday’s show will be honored for the rescheduled date of March 15, 2022. If you are unable to attend the new date, we will issue a refund and the tickets will be re-sold. For ticketing question please contact Geanine at the Bearsville Theater box office by calling 845-684-7133 ext. #3.

All upcoming shows will play as planned:

THIS SHOW HAS NOW SOLD OUT. IF YOU WOULD LIKE US TO INFORM YOU OF ANY FURTHER TICKET RELEASES OR RESALES, PLEASE EMAIL: info@bearsvilletheater.com

The Psychedelic Furs are a British band founded in London in February 1977. Led by singer Richard Butler and his brother, bassist Tim Butler, the Psychedelic Furs are one of many acts spawned from the British post-punk scene. Their music went through several phases, over the years, from an initially austere art rock sound, to later touching on new wave and hard rock.  They had many chart hits  including  “Pretty In Pink” and “Love My Way.”

The band’s ties to Woodstock go back nearly 40 years. In 1982 they enlisted Albert Grossman’s favorite producer Todd Rundgren to produce their record ‘Forever Now’ at Utopia Studios on Mink Hollow Rd. in Lake Hill. Recording was completed over six-weeks between April and May 1982. Todd also played marimba and saxophone on the album. Longtime local Chris Anderson engineered alongside Todd. This album included the momentous single “Love My Way.”

The Psychedelic Furs performed at the Bearsville Theater playing their album “Talk Talk Talk” on October 15, 2010. We’re thrilled to have them back here this November!

Former Psychedelic Furs guitarist John Ashton has been a resident of Woodstock since 1992.

In recent years, his ‘Satellite Paradiso’ – an experimental music project, has created music that explodes in a glorious, insanely catchy, melodic rush that typifies the best of The Furs, whilst clearly setting its own agenda for the future. It features a slew of incredible musicians including local resident and bassist Gail Ann Dorsey (David Bowie/Tears For Fears), Robert Burke Warren, and many more.

On June 8th of this year John was diagnosed with Stage 4 Prostate Cancer that had spread to his lymph nodes. Treatment is challenging.  Surgery is not an option. John has begun an indefinite series of treatments involving radiation, hormone therapies, and possibly access to clinical trials through Sloan Kettering in New York City.  Most health insurance policies do not cover the unexpected and inevitable snowballing expenses in situations such as this.

“The Furs – were as dark and driving as the first time I saw them in New York, in 1980, but with more greatest hits. Singer Richard Butler prowled the stage with a limber menace and that scoured-Bowie signature in his voice.” Rolling Stone

“By the time they hit their groove the Festival Hall resembled a student disco.’The Times ★★★★

“The English sextet’s swooning New Wave sound has influenced a legion of bands, from Echo & the Bunnymen to the Waterboys and the National.” The Independent ★★★★