Weekends at Bearsville. AMERICANA BBQ every Saturday, 12.00-5.30pm, at Bearsville Park and the Iconic Bearsville Theater by the banks of the Sawkill Creek.

We do ask for a small cover charge which will go directly to the musicians on the day. Respect our Musicians and Keep Music Alive!

The Bluegrass Wranglers: Recently, the artist has been gaining a lot of exposure and moving up the musical ladder. His song, “The Rain Came Down,” won first place in 2020 for the instrumental category in The New England Song Contest. The band has been recording new material and has enjoyed some recent spins on Sirius XM The Village.

“ Bob brings a nice mix of a Jerry Jeff Walker and John Prine song style to mind with “Mile Or Two”. Good work with a band that does not get in the way and a hot banjo break that jumps out” – John McEuen (renowned roots musician and producer of the historic “Will The Circle Be Unbroken” album and XM radio host)

“We really enjoyed it . It was a gorgeous night and we just loved Bob and his band . I heard from someone on the arts council that people were raving about what an excellent concert it was . The best of the season”.
– Judith Secco- New Milford Ct

Along with outside the box versions of standards the band is known for it’s driving original Bluegrass songs. Virtuoso playing and soaring vocal harmonies are a trademark of this diverse seasoned ensemble. Bob anchors the band on guitar with Doug Moody on fiddle and Roy Coates on the big bass. Their live performance is a musical experience that highlights the blues and Appalachian folk music, moving on to cover popular bluegrass, country, jazz standards and more. Made in the USA.

New Breaks Bluegrass Band: Some of the Hudson Valley’s most accomplished acoustic bluegrass musicians have come together as the five-person New Breaks bluegrass band. The band is a spinoff from “Hudson Valley’s Hillbilly Band,” No Brakes, which apparently got a brake job that realigned its own members with some new talent. Frank Kara, who will appear as a vocalist also playing the mandolin and guitar, was inspired by hearing Tony Rice at a Winterhawk Bluegrass Festival. Kara segued from being an electric-guitar generalist to playing purely bluegrass. He was a founder of No Brakes and later became a member of the Mama Tried bluegrass band. He now leads New Breaks.

Gary DiGiovanni sings and plays banjo, which he studied with Bill Keith after moving from New Jersey to the Hudson Valley. He has long since given up his first instrument–the trombone.

Carl Radens, on mandolin, guitar and vocals, is the band’s technologist. He builds and repairs a variety of stringed instruments, and works as a computer research and development engineer when he’s not playing bluegrass. Nina Dryer, on fiddle and vocals, also plays viola and cello when she’s away from bluegrass. Nina is a music teacher working in Connecticut public schools. Bassist and vocalist Rusty Boris has been playing with Frank Kara for over 20 years and is a music instructor at Dutchess Community College. 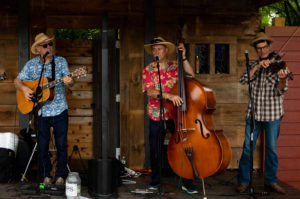