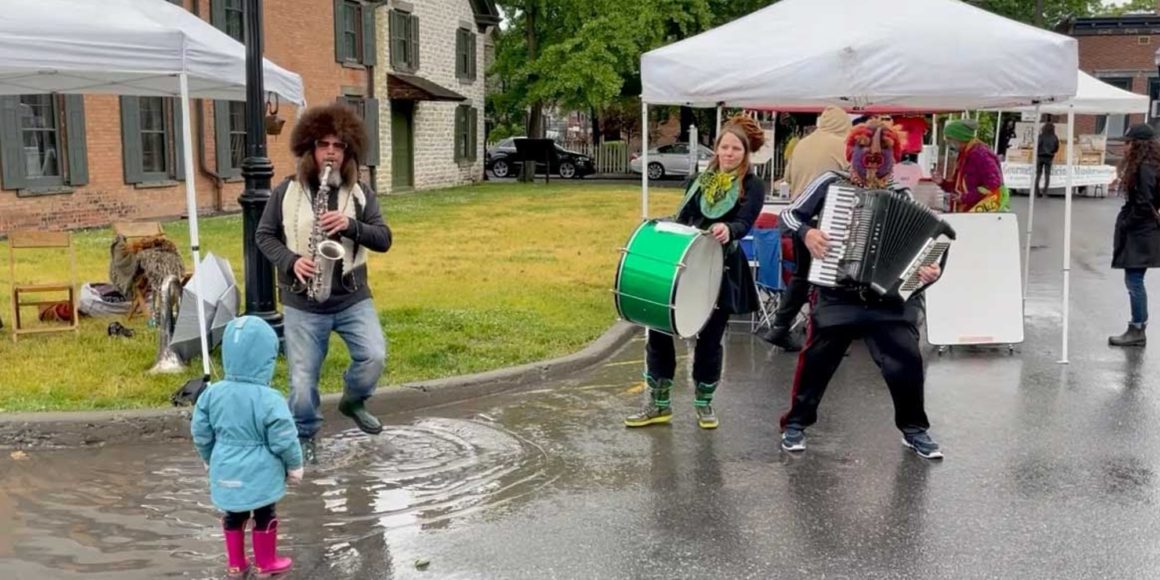 Weekends at Bearsville. AMERICANA BBQ every Saturday 12.00-5.30pm at Bearsville Park and the iconic Bearsville Theater by the banks of the Sawkill Creek. We do ask for a small cover charge. Too often, local musicians are paid poorly (or not at all and expected to work for tips). We are leading the fight to pay musicians a decent amount for their contributions. Respect our Musicians and Keep Music Alive!

Mac $ Cheexe Balkan Power Trio is an acoustic group specializing in traditional and modern village and urban folk music from the southern Balkans. Their repertoire features music from Macedonia, Serbia, Albania, Bulgaria, Greek, and Turkey and is strongly influenced by Roma and Ottoman cultures and traditions. This music is typically performed for social-cultural occasions such as weddings, holidays and annual village festivals celebrating the seasons. Tim Allen (saxophone), Matthew “Max” Fass (accordion) and Johanna Dun (percussion) bring an ancient-modern musical synthesis from the regions where East and West overlap and present it in their own style to audiences throughout the Hudson Valley and beyond.

Get ready for a show of rousing, funky and rollicking country blues music when Bennett Harris takes the Bearsville Americana stage. He’s singing and fingerpicking up a storm of Delta/ragtime guitar blues, and blowing a mean harmonica to boot! Bennett Harris studied guitar as a teenager in New York City, where he absorbed a diversity of musical influences. As an adult, he has focused his energy and attention on the traditional acoustic country blues genre, listening closely to classic pre-WWll artists such as Blind Blake, Son House, Robert Johnson…as well as contemporary revivalists including Jorma Kaukonen, Ry Cooder and John Hammond. Bennett learned blues fingerpicking technique from the late Ian Buchanan —a protege of Rev. Gary Davis. Ian was Jorma Kaukonen’s guitar tutor as well. Later on, the experience of seeing the ever-dynamic John Hammond Jr. perform inspired Bennett to take up slide guitar and blues harmonica. A classic 1930s National steel Duolian guitar is a mainstay in the shows. With its southern drawl and nasty growl, the National is a perfect vehicle for Delta blues “bottleneck” slide playing. Bennett also uses a 1937 Gibson L-O flat-top acoustic guitar. Bennett’s repertoire is ever-expanding, including songs of Bessie Smith, John Hurt, Fred McDowell, Blind Boy Fuller, and originals. He’s an exciting showman, aiming to present a poignant and upbeat listening experience. Blues has been called the Devil’s music; a flattened note bent in just the right tickling spot on the harmonica, the human-like cry of the brass slide moving slyly up a guitar string toward a chilling blue note, the moan of the singer’s voice…all combine to express the blues. This is not the Devil’s magic. It is human magic — emotional, soulful, tragic and joyous, archetypal and direct. Blues exists apart from fleeting trends and fashion, as it resonates deep in timeless American culture.